As of today I have been living in Maine for 4 months and 10 days! I can hardy believe that it’s going to be 5 months in January. Time has really flown at an ungodly rate.

Looking back, a lot has happened since I’ve moved to this State. I’ve met some amazing people, have been living on my own for the first time ever, drove in the snow for the first time, gotten my car towed more times than I can count (mostly because it broke down on me), and I work two jobs. Five years ago, I never would have imagined I’d be standing where I am today. Five years ago, I don’t think I’d be strong enough to be standing where I am today.

I keep being told by the people around me that I’m so strong for doing what I’m doing. Moving to a new State right after I graduated high school to achieve residency and acquire In-State Tuition for the university I want to attend. Before moving here, I had never had any real experience driving on a high way or a turnpike. I never had any experience living on my own or driving in the snow. I’ve never had two jobs and worked myself to the point of exhaustion and collapse just so that I could pay rent (more on that later).

My point is, Bookoholic’s, to me this is just natural. I mean, the way I’ve been looking at it all along is that, if I want to travel the world someday, how can I let moving to a State, that’s ten hours away from home, get the better of me? How can I just let one of my dreams and goals collapse? Do I really want to be that person that says, “I tried, but I couldn’t do it.”

The answer is no for all of those. I can’t let it get the better of me, I can’t just let one of my goals collapse before my eyes, and I don’t want to be that person. I refuse to be that person, so when people say that I’m so strong for doing all of this, it doesn’t feel like I’m being strong, it just feels like common sense to me.

Anyone, absolutely anyone, can do what I’m doing right now. I don’t think it’s about strength, I believe that it’s just about having the right motivation and mind set in the situation and have enough of that motivation to keep going when upsetting or angering situations present themselves.

My motivation? To attend the University of Maine, get my degree in English, become a well known author, get my TEFL, travel the world, and be that person who says, “I tried, and I succeeded.”

Anyway, now that I’ve got that off my chest let’s talk about this whole towing incident. So, the most recent time it happened was actually just a few days ago. My 2002 VW Beetle is currently out of commission. It needs a whole new engine wiring harness and, as that’s a bit out of my price range to fix right now, I’m currently borrowing a car from my dad and step-mom to commute to and from work and the store.

Well, a few days ago, Maine finally had it’s first snow, and it was a lot. It was pretty, but a lot.

At the apartment complex I’m currently staying in, they have this plow plan and that’s great and all, but when they plow a certain zone, if any car is in that zone it gets towed at the owners expense.

It just so happens, on my day off, they decided to plow the first zone where both my cars were. Well, I went out, moved my first car and then went back for the bug. It didn’t start, at all. So, it got towed.

Three hours and $200 later, I finally had it back and in a section of the complex that is reserved for long term parking for people going home for the Holidays (most of the people that live in the complex are attending UMaine).

So yeah, that happened. Here’s a picture of the snow. Again, pretty, but a lot. 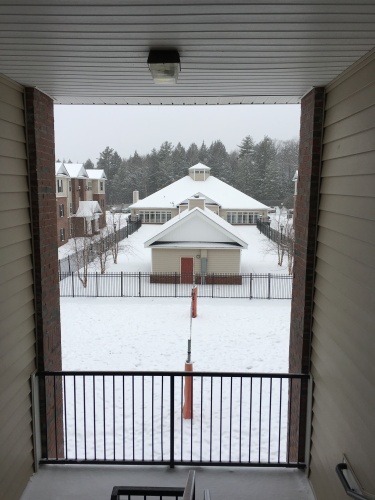 Anyway, I’m just glad that it’s done and over with. The bug will be gone soon, so I’m excited to just be rid of it. It’ll be a little sad to say goodbye to the car, though. It was my first car, and nothing can replace your first car.

So, what’s been going on the last few days? Nothing much, just work mostly. I had to ask off today from both places, though. There was no way I could go another day without rest from both jobs. I’ve been working the last 9-10 days without a single day off between the two and it started to get to me to where I was crying over spilled coffee beans, literally.

I spilled the beans and just freaked out. I had to leave the front of the store. I was mentally and physically exhausted at this point and I knew I had to be off from both places for a bit. I’m glad I asked off because I feel rejuvenated. Like, I can catch anything the world throws my way (I really hope I didn’t jinx that).

I’m excited for Christmas to roll around. It’s going to be a fun day and I have some pretty exciting stuff planned, you’ll know the day it happens, I’ll definitely post about it. I’m also pretty psyched about The Death Cure coming out in January. It’s going to be absolutely amazing! If you haven’t gone and watched the trailer, stop reading this a go. I’m serious!

The way the second movie ended left me a bit upset considering it didn’t follow the book at all, but it did keep me intrigued as a viewer of the movie alone, so that’s good. Plus, I love Dylan O’Brian as an actor.

Also, to those of you who are Miraculous Ladybug fans, can I just say how in love I am with this season?! I mean, the Dark Owl episode left me screaming! So close, so freaking close, right?

If you haven’t seen the show Miraculous Ladybug I’ll explain it to you, but in all honesty, to completely fall in love with the show, you just gotta watch it.

Miraculous Ladybug is a children’s cartoon that originated in France. The story takes place following two characters, Adrian Agreste and Marinette Dupain-Cheng. Both of them are in high school. Likewise, they’re both the protectors of Paris, Ladybug (Marinette) and Chat Noir (Adrien). (On a side note, it is spelled Chat, it’s the French word for cat. Noir means black, just so you know).

This show originally interested me because of the fact I absolutely love France and was taking French at the time I discovered it. I fell in love with the show after that because of the characters. Marinette and Adrien have no idea the the other is the hero they work with the keep Paris safe, like wise, this means they don’t know they have mutual feelings for each other. Adrien/Chat Noir loves Ladybug, Marinette/Ladybug loves Adrien. Ladybug does not love Chat Noir. It’s pretty great and tormenting at the same time to the viewer since we know that they actually like one another, but the characters themselves have no idea.

The show currently airs on Nickelodeon, which is great. I personally like watching it online and in French with subtitles so I can watch the newest episodes as soon as possible. Speaking of which, the newest episode of season two is released tomorrow (12/17/17) in France! I’m so excited to see it!

It’s honestly, a great show and I’d suggest anyone watch at least one episode, especially if the French culture interests you, because it is a French cartoon and it does take place in Paris, France.

Well, I think that’s about it for today, Bookoholic’s! Not too much has happened recently, but I’ll definitely be posting more in the coming weeks. I’ll talk to you more later!

Support me on Ko-Fi